Making clean fuel and raising a son in Barrio Logan 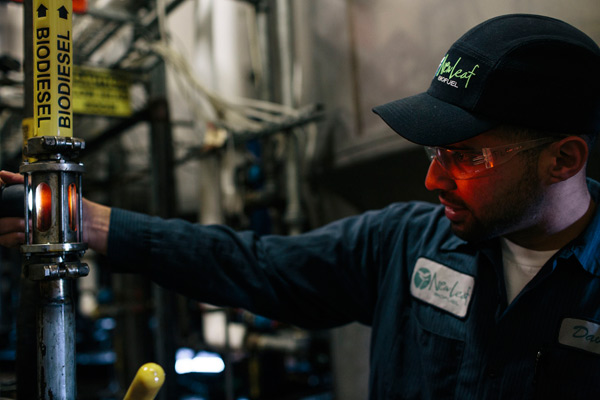 Editor’s note: This story originally appeared at UpLiftCA.org and is reprinted here with permission.

One day in 2011, 27-year-old David De La Peña walked into New Leaf Biofuels on Newton Street in the Barrio Logan area of San Diego and asked for a job.

He had been working in construction, 50 miles away from his home, in San Marcos. As the recession slowly killed off construction jobs, he started to look for something close to his home in Barrio Logan. He had a new baby son and he needed to be near his family and needed to spend less on gas.

David had a lead on a job at a sandblasting plant down the street, so he started there and just kept going. “I went to 20 or 30 plants on Newton. I knocked on every door,” he says.

New Leaf, a small plant that makes biodiesel out of recycled fryer oil from San Diego restaurants, hired him.

They put David to work in what they call “the yard,” where a particular used fryer fragrance and a thin coat of cooking oil cling to everything. A couple of adopted street cats hang around waiting to be fed and the trucks regularly pull up to deliver oil. David started out doing maintenance, cleaning up and off-loading oil from trucks—sending the oil through the auger and shaker to clean it before it goes into giant tanks inside the plant.

Now, four years later, David has worked his way up to be a plant operator. He blends and tests the fuel, monitoring it on several computer monitors as it goes from fryer oil to a biodiesel that you can run in any diesel vehicle.

Because he can operate the whole plant and knows how to run the yard too, he’s become a valued member of the staff. He’s a quiet person with a gentle but determined demeanor that endears him to his boss and co-workers. But his job at New Leaf has been far from a sure thing. He’s seen his co-workers laid off and he’s been through two rounds of pay cuts as oil company lawsuits against California’s Low Carbon Fuel Standard (LCFS), together with constant stopping and starting of federal incentives by Congress, have provided an unstable market for biodiesel and alternative fuel startups like New Leaf.

Read the full story about David and New Leaf at UpLiftCA